Growing old in, and with, Japan

Someone sent me to read John Haffner's interesting blog post Immigration as a Source of Renewal in Japan. It's about Japan "growing old", and it's of particular relevance to me because it's an ambition of mine to grow old as an immigrant in Japan.

Now, I'm not really the sort of immigrant John Haffner has in mind as a solution for Japan's ills. Although English-speaking Westerners do figure in his prescriptions, he sees young, dynamic, entrepreneurial people -- many from surrounding Asian countries -- as the only way to kick the nation off a demographic course which, left unchecked, will see its population shrink from 127 to less than 100 million people by 2050. Niken and Mahesa, two charming Javanese students we befriended in Tokyo in December, might fit the bill better. 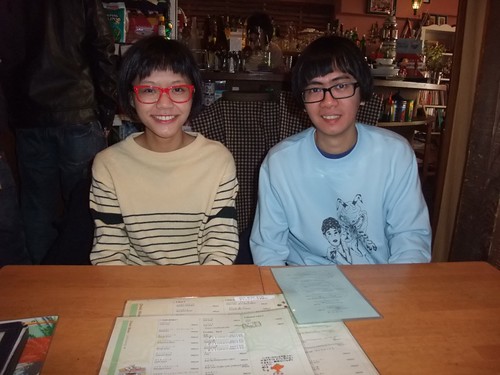 Niken and Mahesa plan to go back to Jakarta when their studies are over. But they'd certainly be an asset to Japan: stylish, resourceful, trilingual, full of good ideas, ambitious and friendly, they could represent one future for a Japan even I've reproached for entering a navel-gazing new period of sakoku, or cultural isolation. Other contenders might be the family of Malaysian restauranteurs we dined with in Osaka in early December. Inter-marrying with Japanese, they were bringing members of their Malaysian families up to Japan one by one.

As once-solid mega-corporations like Toyota and JAL begin to wobble badly, as Japan's debt approaches 200% of its GDP, and as China overtakes to become the world's number two economic power, it's clear that something has to change in Japan. As Haffner points out, "whereas 11 workers supported two retirees in 1960, the ratio was four workers to one retiree in 1999, and by 2050 the UN projects that only 1.7 workers will support one retiree. Those workers will face a heavy burden," and "the continual improvement in living standards the Japanese have enjoyed during the last half-century will come to an end.”

After making an enthusiastic case for increasing Japanese immigration, though, Haffner admits it just isn't likely to happen: "The country is likely to do no more than tinker with its immigration levels. By implication, therefore, Japan is also likely to become a smaller, more debt-laden and less productive country in the coming decades."

So that's the change we're most likely to see: shrinkage, decline, deflation. Ha, exactly the same processes I expect to see in myself over the next thirty years! Maybe Japan will be the perfect place to grow old! 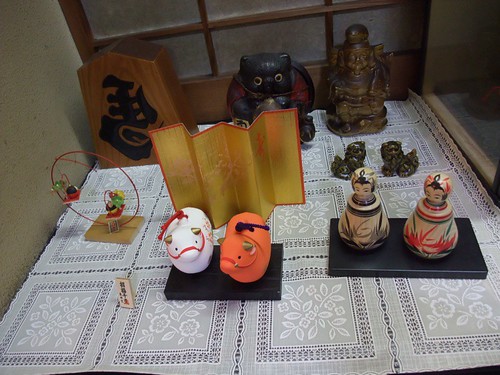 Given that we're not likely to see a sudden immigration-powered economic miracle in Japan, or a sudden massive baby boom (despite the government basically paying people to have kids), is there a silver lining to Japan's likely silver age? I think there could be several. Let's list them.

* According to Iwao Fujimasa, a demographer with the National Graduate Institute for Policy Studies, depopulation could depress the real estate market and affect the financial standing of banks dependent on real estate prices. In other words, cheaper house and rental prices in Japan! Yay!

* Fujimasa thinks that population decline will boost gender equality, break down generation gaps and bring a more relaxed way of living. Land prices will fall, people will be able to afford bigger homes, and the daily crush on trains will be lessened. (Population decline not all bad news, Japan Times)

* Then there's the argument that we need to stop promoting endless economic growth as the only goal. As Sakamoto put it: "The current economic system has required people to be busy trying to achieve growth -- it's as though they're continually riding a bicycle. People have to do things fast to meet the demand for excessive efficiency.... I think it would be better if Japan became a beautiful third-rate country. It would be nice if Japan was a place of delicious food, beautiful scenery and abundant nature. If that were the case, I think it wouldn't matter if one had little money."

* This could, in other words, be Japan's midlife crisis, and the best thing about a midlife crisis is that it's an opportunity to ask some basic questions: "Is that all there is?" and "What really matters to me?" Trying to catch Japanese artists in the act of asking these questions is the whole premise of the Aftergold art show I'm currently putting together.

* Interviewed by De:bug magazine in November for their Japan special, I was asked to clarify my views on immigration in Japan. The editors had been troubled by some comments I'd made, and said they had a different definition of multiculturalism from mine. I responded that while I'm very much in favour of immigration to Europe, I felt that many of the things I value about Japan are only possible because of the high level of trust, harmony and homogeneity that exists there. 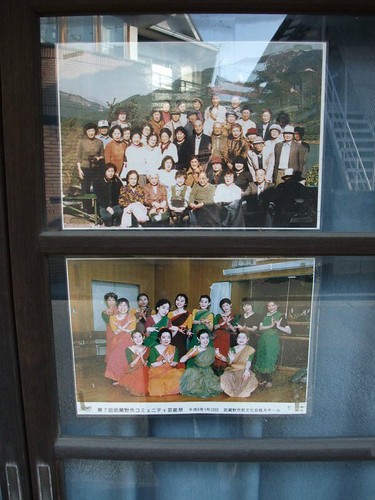 * "To impose exactly the same sort of multiculturalism worldwide would not be multiculturalism at all, but a kind of monoculture. It would result in a decrease in diversity," I added. "Japan is not a hegemonic power in the world today. The US is. Therefore, I see the maintenance of Japaneseness as a form of resistance struggle. It opposes the homogenising globalisation which proposes the US model as the one we must all follow."

Let's be clear: I'd love DPJ prime minister Hatoyama's cherished personal vision of an Asian monetary and political union modeled on the European vision of Jacques Delors and Count Coudenhove-Kalergi to be realised. I'd love Japan to be filled with young, visionary and dynamic people like Niken and Mahesa, or like Hisae's Korean mother, for that matter. I think these immigrants do and would continue to expand Japan's culture in interesting ways. And I have an obvious personal interest in Japan's visa requirements getting loosened so that people like me can "flood in" and "swamp" the nation.

But realistically that ain't gonna happen. Not in my lifetime, anyway. So all I'm saying is that the alternative is interesting too. Japan will get cheaper, smaller, poorer, purer, wiser, more itself. Rather than forging new forms of industry and commerce (same old thing, same old bling), Japan will from now on be pioneering new ways of living; post-industrial, post-materialist, post-wealth, post-growth. This is something the world doesn't know much about yet. How to live longer, live better, yet live cheaper, live smaller. How to live for the pure joy of living, not for the grim accumulation of money. How to "decline successfully". How to be wise. Show us how it's done, Japan!
Subscribe

Will someone not help out with a visa?

It is strange. You asking about help, but anonymously. How people can send you reply?

This article on the awfulness of pregnancy is also relevant to a discussion of demographics. While aging is no rose garden -- and dying probably hurts -- pregnancy is hell. Apparently.

Just want to add a footnote. It sounds rather as if Haffner is portraying this...

...as the good old days. It's worth bearing in mind that what that figure reflects isn't just a vibrant young thrusting nation. It's also a nation that's recently seen big parts of its population wiped out in a war, and a nation where people die much younger (through worse nutrition and lower standards of living) than they do now.

Japan's problems today are, in a sense, "the problems of paradise".

Also: the population of the UK (an only-slightly-smaller island, 244,000 square kilometers compared to Japan's 377,000) is about half the size of Japan's. Population density in Britain is 248 people per sq km, in the Japan it's 336. Even with a really radical population reduction, Japan simply becomes Britain (with better food). Is that so terrible?

Not really, because the demographics will be very different. The average age in Japan will be much older, which in turn will affect Japan's creativity, energy levels, etc.

But have you considered that a declining country won't have any money to keep its social programs afloat? Older people means extra pressure on the health care system, and no one to pay for it. "Growth" is mostly a diseased concept, but is also partly necessary to pay for "growing" expenses.

Population decline: economic consequences puts both the pros and the cons. Here, from that article, are some of the pros:

* Standard of living does not necessarily correlate with quality of life, which may even increase as the population declines due to presumably reduced pollution and consumption of natural resources.

* There may also be reduced pressure on infrastructure, education, and other services as well.

* Predictions of the net economic (and other) effects from a slow and continuous population decline (e.g. due to low fertility rates) are mainly theoretical since such a phenomenon is a relatively new and unprecedented one.

* The decade long economic malaise of Japan and Germany is often linked to these demographic problems. However, the economies of both Japan and Germany went into recovery around the time their populations just began to decline (2003–2006). In other words, both the total and per capita GDP in both countries grew more rapidly after 2005 than before. Russia's economy also began to grow rapidly from 1999 onward, even though its population has been shrinking since 1992-93 (the decline is now decelerating).

* A declining population (regardless of the cause) can also create a labor shortage, which can have a number of positive as well as negative effects. While some labor-intensive sectors of the economy may be hurt if the shortage is severe enough, others may adequately compensate by increased outsourcing and/or automation. Initially, the labor participation rates (which are low in many countries) can also be increased to temporarily reduce or delay the shortage. On the positive side, such a shortage increases the demand for labor, which can potentially result in a reduced unemployment rate as well as higher wages.

An absolutely wonderful article! Summed up a lot of what you've said over the past years and added some valuable insights to an important issue. Basically exactly what I want from a Momy article.

About an hour ago, troll! And you?

Beethoven uses too many notes, and his chord sequences are terribly predictable.

It is quite confusing whenever they talk about population decline. For example one part of a country might have a low birthrate while another might have a high one. It puts a different pressure on the local market. Let us say that there is a population decline in a town with it's industries intact, which would make a huge difference right there, while in the rest of the country the population is steady. However, no one wants to live in the town where there is work because of whatever reasons they might have.

Population de-equalization I would like to call it. It is prevalent, I am certain.

antisemitism used to be somebody who hated the jews, now it is someone whom the jews hate.

please excuse the offtopicness, but you mentioned unsuccessfully looking for a Martin Rev CD a while back.. is 'Cheyenne' an album you would be interested in having? i'm happy to buy for you if so; used copy just came in down the street..

It's a kind thought, but I'm actually very down on CDs at the moment. Each one makes me think "How will I divest myself of this plastic thing?"

I'll tell you what, Nick: come February 11th I better become magically more handsome and sexually potent or I'm not going to miss you at all. It better be epochal and the earth doth rend, or else this is just a blog. And how crude is that?